Picture this: a woman dressed in a blue-collar uniform with an employment badge affixed, hair pinned up and wrapped in a red polka-dotted handkerchief, with her sleeves rolled up to expose a flexed bicep proving that, “We,” as in women, “Can Do It!”. This iconic poster was painted by J. Howard Miller and the woman depicted is famously known as Rosie the Riveter.

This poster was one of many artefacts created in a campaign that encouraged women to join the workforce during World War II. Due to the labour shortage brought about by the absence of men who were away fighting overseas, women assumed roles traditionally held by men in factories, heavy machinery, and lumber and steel mills to maintain production during wartime.

During this period, the United States saw significant increases in female engagement in the labour force. Female workforce participation increased 10 percent between 1940 and 1945. By 1945 about one out of every four married women was working outside of the household. It is clear how images influence our understandings of the world; and how they form and shape our reality. Visual representation is powerful, and calls us to question how we apply it to depictions of the working woman. This notion is crucial to our understanding of the role women play in our economy and shapes how society classifies work and who conducts it.

A  2018 Pew Research study concluded that online image searches displayed a notable difference in representation between women and men for various occupations. Researchers found women were underrepresented in images such as general managers, chief executives, and security guards; while being overrepresented in image searches related to models, flight attendants, and singers.

The study highlights a distinction when examining images by determining if the individual was actually engaged in the position of interest, as opposed to just being associated with the props of the occupation. The study concluded that “many searches for jobs did not yield a majority of images actually depicting people working in those jobs: and only “44% of image search terms from a broader list of initial occupations returned a majority of images that showed people engaged in the job – rather than other people or objects associated with the job”, which likely does not lend credibility to the impression of women performing this job in real life. 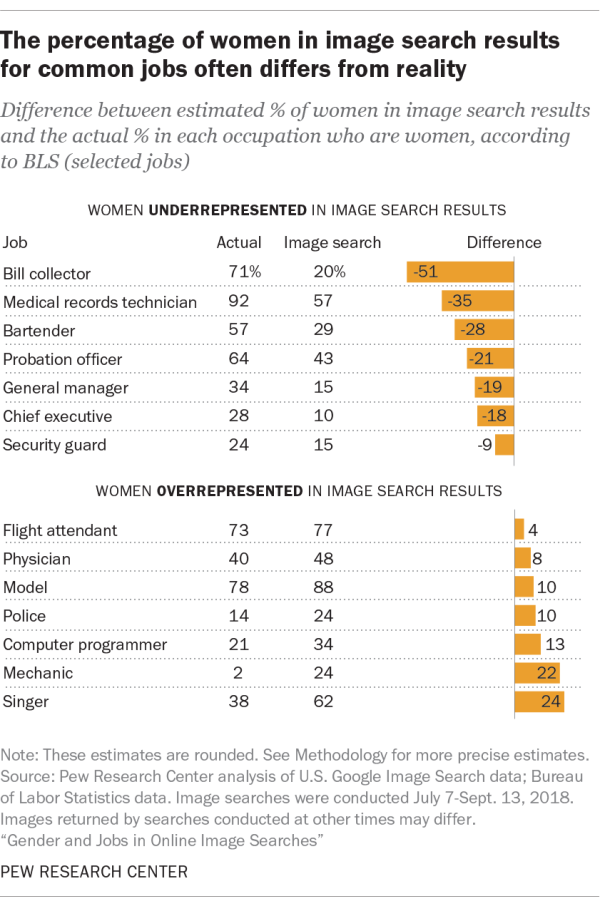 According to a CNN report, Susanna Nezmeskal, head of diversity and values at Deutsche Post DHL Group, affirms, “real images from the working environment can say so much more than a simple stock or modelled image. Showing people who this employee is and why she was singled out can also shed some light on the ways different women do a variety of jobs within the company — things beyond the stereotypical “feminine” work”, and that organisations should “use real pictures to show people ‘This is what happens in our company,’ and not just on a brochure”.

Looking back at the imagery surrounding Rosie the Riveter, while it was effective during its time, it promoted women as a supporting role required during a time of need. The imagery was brought about in an urgent necessity and not to challenge the status quo. We can see this by, first, acknowledging the original painting of Rosie by Norman Rockwell. This image is similar to the now more widely circulated J. Howard Miller version.

The Rockwell rendition features a full-body silhouette of a woman, postured to match Michelangelo’s Sistine Chapel ceiling painting of the prophet Isaiah. She is dressed in the familiar blue-collar jumpsuit on a lunch break with a riveting gun resting across her lap. The original model for this painting was 19-year-old Mary Doyle Keefe, who worked as a telephone operator. Rockwell painted his Rosie to appear noticeably more muscular than Doyle. One may ask why Rockwell made this choice.

According to historians Sarah Myers and G. Kurt Piehler, during the world war II era, there was “a fair amount of ambivalence about women entering the workforce, especially if they had young children. Efforts to provide adequate daycare for women were met with considerable opposition”. Men who were remained working on the home front “were resistant to the idea of having women work as welders, riveters and construction workers, fearing the feminisation of these professions and decreasing wages”.

Myers and Piehler go on to state that because of “concerns about fluctuating gender roles, much wartime propaganda would portray women who ended up assuming nontraditional roles in the workforce as attractive, white, feminine and middle-class workers” in order to communicate that these circumstances were temporary and would only last until the war concluded.

They observed that “in many of these posters, you can easily imagine the women returning to their roles as homemakers once the war was over”, and in the case of Rosie, she “certainly reflects the remarkable contribution of women to the war effort. She’s also more masculine than much of the wartime propaganda featuring women – something that undoubtedly inflamed American anxieties about gender roles. At the same time, her femininity is still present with her red lipstick and womanly figure.”

As Rosie and her fictional existence began to fade away, so would the surge in female labour. As the war ended and men began to return home, women were forced to leave the male-dominated positions; and Rosie would be forgotten until the 1980s, when she would reemerge as a feminist symbol of empowerment.

It is apparent how images and symbols impact our thinking and actualise our reality. This arguably makes the case why depicting women at work should be rooted in reality and not propaganda. Female participation in the workforce is not about a provisional agenda. It is, and should be, an inclusive fact of life. Showcasing images and material that reflects women’s contributions and ambitions in the workplace is imperative; because it reinforces women’s belief in their ability and provides confidence in those pursuits.

A study conducted by 21st Century Fox, the Geena Davis Institute on Gender in Media, and J. Walter Thompson Intelligence, surveyed over 2,000 women to measure their impressions of the X-Files character, scientist Dana Scully. The findings were enlightening. About “two-thirds (63%) of women that work in STEM say Dana Scully served as their role model,” and “50% said their interest in STEM increased after watching Scully onscreen”.

The importance of visual representation of women’s work is not just about levelling the playing field between men and women. While we want to see women reflected in all professional fields, we should not undermine duties in women-dominated occupations. Imagery not only informs who is doing the work, but speaks to what qualifies as reputable work. Legitimate labour is not only conducted in an office, factory, or a lab; it also includes the often unrecognised labour of domestic work.

Even though conducting an online search for “caregivers” may result in an over-saturated representation of women, which unfortunately reinforces stereotypes – it should not mean that this kind of work is frowned upon. It can be argued that if we begin to deconstruct notions of gendered work, it will become legitimised.

According to a  2017 study, when examining gender-neutral occupations, men are viewed as more credible than their female peers, despite the fact that performance between men and women does not differ. This notion can be applied when we examine societal perceptions on parenting between mothers and fathers. When parenting, women are often faced with more scrutiny and judgment than their male counterparts, who are more likely to be overly praised for the same general parenting efforts.

Further evidence demonstrates that male participation can legitimise work through observations of their absence. Other studies have found that men leave female-dominated fields because “female qualities tend to be culturally devalued, the result being that men often refuse to be associated with women’s work – so much so that some even prefer unemployment to taking female jobs”, which only continues to perpetuate gender norms and gender disparities within various professions.

This is the case with jobs involving extensive coordinating, training, and supervising duties (e.g., service and health organisation managers, legal assistants, education counsellors, and vocational supervisors). Since these jobs resemble stereotypically male occupations more closely than do low-status female jobs (such as librarians or kindergarten teachers), men entering them might suffer less negative stereotyping, and thus less pressure to leave.”

So, picture this: we are living in a reality where conducting an online image search for “caregiver” yields results that are inclusive of men and women image searches for “chief executive” or “manufacturing” to include a robust selection of women is the norm. The effort of inclusive representation regarding female participation in the labour force is work that crosses gender lines.

If we can broaden our definition of work and reinforce it with images that are inclusive, representative and real for both women and men, we can expand our perspective on labour and how we value it – and ultimately how we value women, female attributes, and their contributions to the labour force. And in doing so, an equitable society won’t be imaginary. It will be reality.

Why does femLENS focus on women and girls?
Women and girls are still underrepresented in almost all areas of life. Photography as a storytelling tool shouldn’t be the domain of the privileged few. Technology today allows us to make that happen as so many people have access to a mobile phone with a camera. Read more